We had perfect weather last weekend to celebrate Averleigh's second birthday.  It was warm and sunny, perfect for a BBQ lunch and just playing in the yard.  Her new water table was were she entertained from, I couldn't believe what a magnet that thing was for every kid.  I think everyone had a fun time.  Averleigh was certainly spoiled and is still having fun getting to know her new toys and books.  With all the play I'm afraid I didn't get a very good shot of the birthday girl on the big day.  Mostly, I got frowny photos. Instead of that, here's a fun shot from the park the week before. 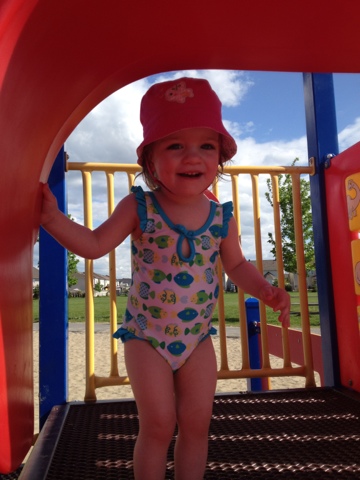 We're lucky to have these great splash pad parks so that's why the swimsuit... Not that she went near the water as there were a lot of bigger kids playing that day.

Now, I am not a cook in any sense of the word.  I've been known to joke about the only thing I bake is polymer! But birthday carrot cake is the one exception and it's so worth it.  The recipe I know is a photocopy from my mums giant binder of clipped recipes so who knows where it originated from but it has a good bit of apple in it that makes it nice and moist.  The cake, while delicious, is also a way for me to add some polymer to the celebrating.

This year, I went for a loose woodland type theme and had some foxes and an owl for the cake.  The owl started out as a dollar store find that I stripped these odd cork feathers off of and painted a bright "goji berry" and gave her a ruffled copper wing instead.  Here's the before, or more like just in progress: 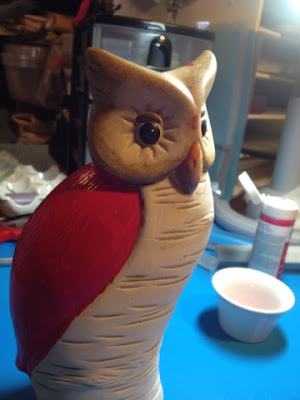 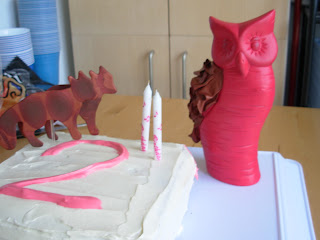 I think it turned out pretty well.  The two foxes are a little tough to make out here with the party stuff all in the way.  They were just a quicky project with some copper skinner blend I had on hand, a cookie cutter from ikea and a glass stir rod so that the polymer sits just above the cake and not touching the icing. The only other shot I grabbed was basically from the back.  I've tried to blur out the background a bit.  Not ideal shots but you get the idea.  People do some awesome things with cakes, but I kinda like the idea of having a little something to hang on to post birthday. 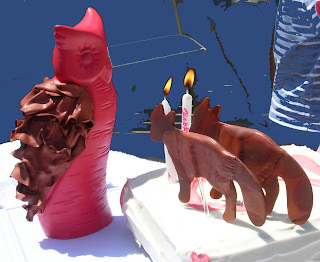 For her first birthday I had a bit more ambitious plan.  This was the first time (um and the last actually) that I tried a sculpted figure.  He's a heffalump, from Winnie the Pooh fame.  He sits on a bed of polymer grass with little paper flowers.  This little platform is raised off the cake by a jar lid.  I couldn't resist making her pennants either since I had those mini clothes pegs in my stash forever.  Those are clay covered baby food jar honey pots in the front.  I've cropped out most of it as each has a little banner with our guest's name just above the hand scrawled "hunny".  Perfect for little treasures. 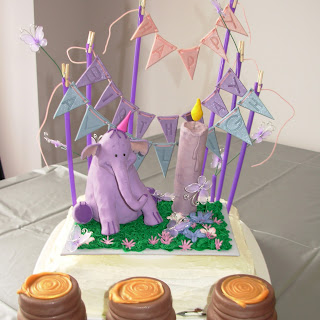 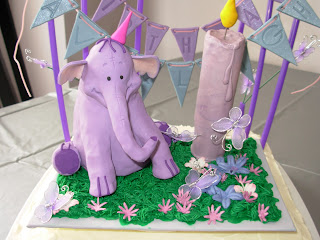 I wonder what next year will bring?
Posted by A Polymer Penchant at 13:47