AJE Component of the month reveal


I was a lucky winning participant and eager to get my hot little hands on a labyrinth pendant from Jenny Davies-Reazor as part of the December Component of the month on the ever inspiring Art Jewelry Elements blog.  It sure is perfect imagery for this last day of the year.

I ended up with this long necklace featuring Jenny’s focal and complemented by my polymer beads, a little glass and some wood rounds.   The idea of a labyrinth had me looking at things I do all the time looking for patterns. Like how I brush my teeth, how I drag a tea bag around and out of a cup, and how I do many things working with polymer.  That lead me to wanting to include overlapping infinity symbols since that’s a motion I seem to fall into naturally.  So I started with a bunch of rich blue beads and a snake of cream clay and well, no two are alike in the end.  I then “glazed” them with tinted liquid polymer. 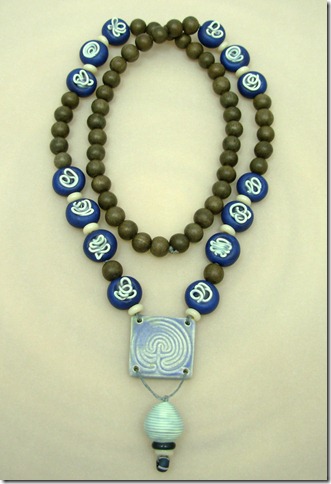 I also found that I have a sand labyrinth that I’ve never tried out. 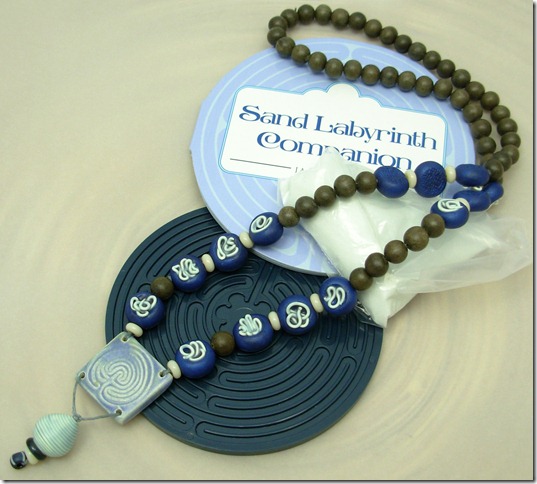 Wishing you all lots of inspiration and all good things for 2013.  I hope you will join me in seeing what everyone else created.  Thank you so much for letting me join in the fun AJE team.

Christmas and catching up

Hope everyone had a great Christmas or whatever you may celebrate this time of year.  We knew wrapping up presents we had bought too many for our one 2 year old girl.  I thinned it a bit by donating some, and holding others for her birthday.  Just like my own mum there are always several gifts stashed in the closet.   I wonder how old Averleigh will be when she figures that out?  I had an older brother to show me.

No picture with Santa Claus this year as I was told repeatedly “I don’t like Santa Claus” each time I asked about it.  I was also told, repeatedly, “I don’t like presents”.  This last one didn’t stand up.   As I type this there are new toys everywhere and there is no sense in cleaning them up since she wants to play with all of them right now. 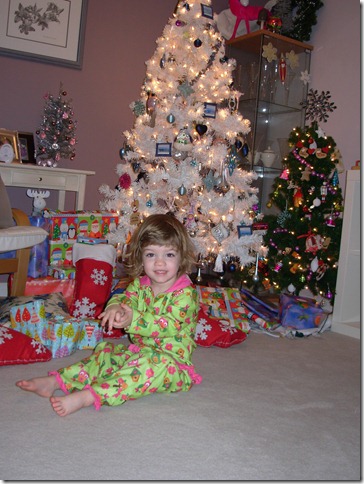 Christmas Eve is always at my in-laws and we started a tradition of new pyjamas from us so here she is Chrsitmas morning showing off said pyjamas.  We spent about two hours opening gifts since she likes to have everything out of the box to really check it out before moving on the the next.  She actually left four presents still wrapped under the tree telling me she would open them later.  Funny girl.  Then we were off to my parents house for Christmas with my family, there’s eighteen of us.  We spent the whole day relaxing with the family and all was how it should be.

As the end of the year is coming I know there are some things not yet done.  I still have bracelets to make for 7000 bracelets of hope and I will get them done, just maybe not before the 31st.  I have to finish my dad’s Christmas present first.  It was going to be ready for the 25th but I decided I wasn’t pleased with the final execution, it needs a take two.  I’m letting that breathe a bit.  I did make some necklaces for my mum though (and actually give them to her on time). 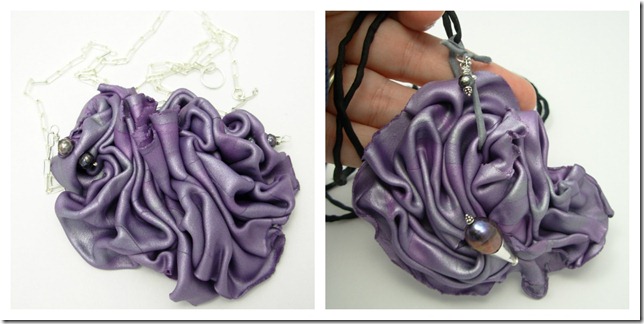 These are very similar, in the end I just couldn’t decide so opted to give her both.  I believe she prefers the one on the right as it is adjustable on the black silk cord.  The version on the left above features sterling chain and some of my all time favourite pearls, hard to see here but they are facetted
. 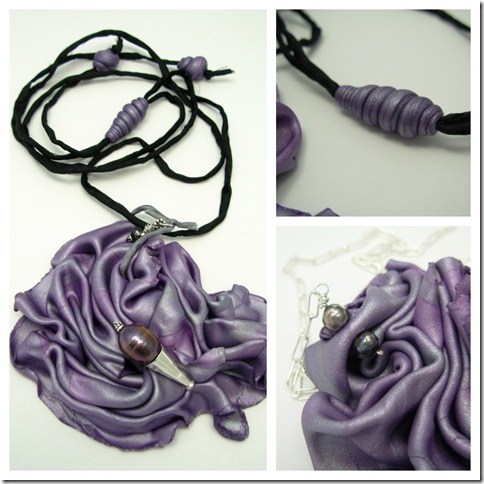 The silk goes through that spiral bead on opposite directions making the necklace easily adjustable and it holds very nicely if I do say so myself.

I’ve declared that 2013 will be the year I improve my wire skills.  It’s needed.  I have all sorts of great ideas for polymer with wire but I really need to bring up those wire skills to make some of those ideas reality.  So I signed up for Kerry Bogert’s Aspire to Wire course happening online this January.  I also was lucky enough to get her lasted book under the tree, (no surprise since I “added it to cart” myself practically) and then there was this in my stocking 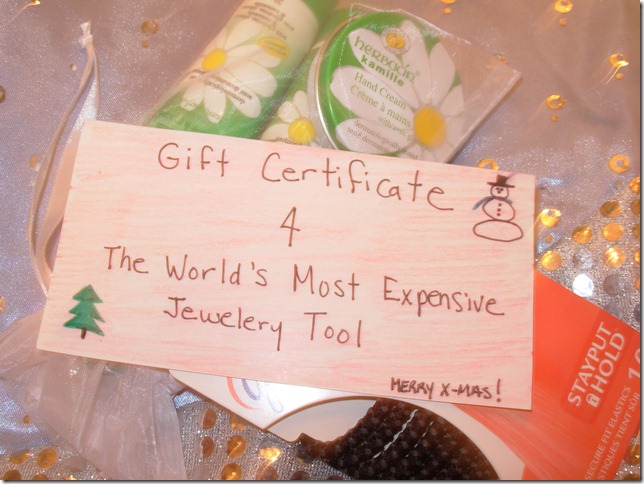 Ain’t he a sweetie?!  My hubby remembered the conversation where I went on and on about trying to decide if I should invest is some quality wire tools now or keep going with what I have… He just couldn’t remember the actual names of anything I was talking about and the folks at the art store he tried to buy from just stared blankly.  He did remember me saying they were “the world’s most expensive” so that’s what I got.  I now have some Tronex tools on order, I will be very excited to put them to good use. 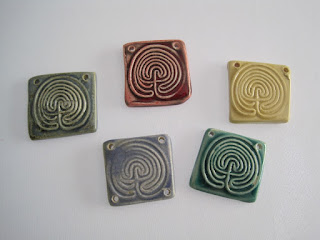 Peace.  So simple and yet so complicated all at the same time.  I don’t have many words to make sense of yesterday's events in Connecticut.  All I know is that since becoming a mother these inexplicable tragedies hit me a whole other way.   It seems my mind can take me to being in that scenario oh so quickly and rush back just as fast…
I was thinking of peace and the first polymer connection that came into my head was this 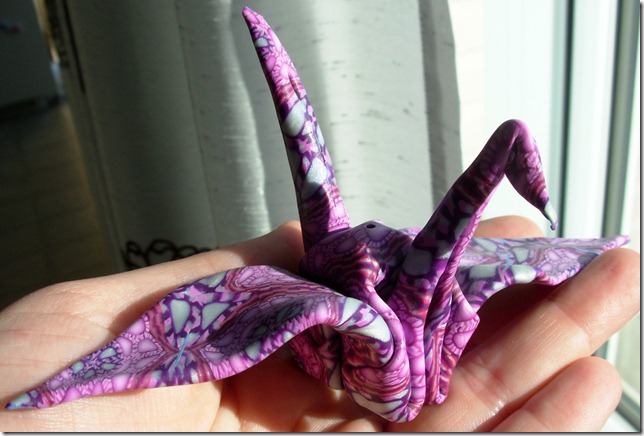 This is a beautiful crane fashioned from polymer by Judy Dunn.  She generously shared her conversion of the ancient origami method to the polymer arena – in video! -  here (since I can’t seem to get it to open here). wait it may actually appear, oh technology!

Judy was also using her skills to shed light on the losses of the war in Iraq, although I haven’t heard news of this in some time, it seems the blog is now by invitation only, so I don’t have current information to share.  Back in 2008, she shared a letter detailing her project to Yoko Ono in beautiful words and pictures.

Peaceful thoughts for all.

My doors are always open to free beads!

Well, a little ways back, Lesley Watt of the Gossiping Goddess decided to share the huge stash of lampwork she was gifted from  Kaz Baildon.  I really adore the concept here of just sweeping of the table, so to speak, and sending the work out into the world to make way for a fresh start.
Here is the picture Lesley shared to draw us all in 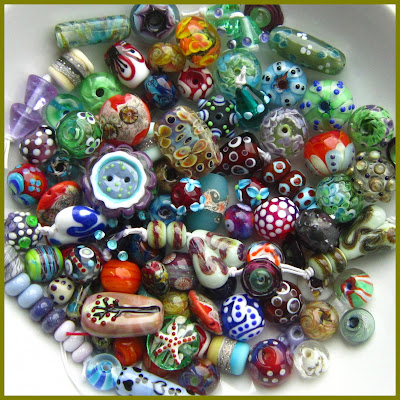 I know, such a hardship to receive some lovely beads and make something out of them.  Of course I jest, but the little beauties I got sure gave me a few fits, but I’ll spare you much of the drama.

Here they are hanging out at my workbench 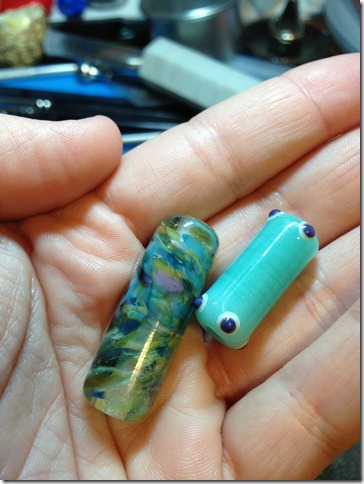 I usually start with mixing up some polymer colours to coordinate and you know, they just weren’t coming up as transparent as I wanted to go with these.  Then I realized I really didn’t have to have them in the same piece either (how is it that I imagine rules?) The smaller aqua tube is still on my workbench with plans to wrap polymer around it’s center and make it into some form of wheel.  My first attempt just not working I’m still engineering….

Meanwhile though I changed tactics and took that beautiful Monet-ish bead down to the basement where all the finished beads live.  I figured there must be beads in my stash that needed a fresh look with a new partner. What I found was a whole bunch of beads, but dialed it down to just a few and some yummy silk that was the perfect shade. 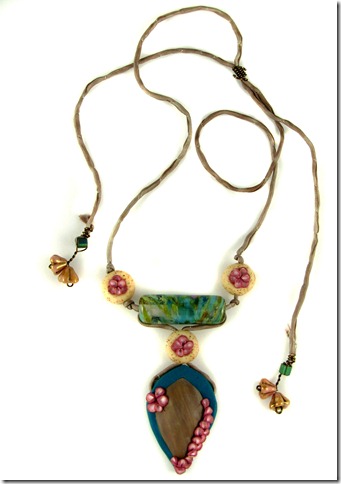 I created the polymer focal and small coins when I did my first Bead Soup Blog Party this summer. 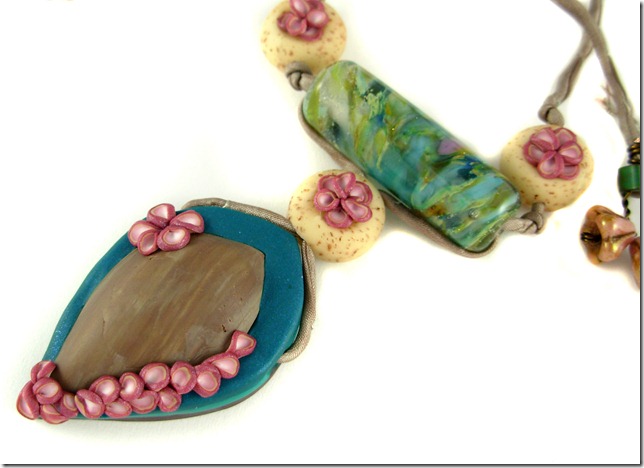 Many thanks to Lesley and Kaz for sharing these goodies and letting me look at my own pieces with new eyes.  I can’t wait to see what gorgeous creations everyone else came up with, since there was quite the bounty to share

I just finished hopping around the Challenge of Colour and it’s hard to say what is more impressive, the gorgeous art or all the creations, not that I need to choose.  I’m so thankful that I was introduced to these images by Erin since there is literally a lifetime of inspiration there.

I didn’t show you everything I created so I thought I’d share now.  As I created the patterns I came up with a bunch of components with no real plan about what I was going to make.  I made a pair of earrings but wasn’t pleased that they looked enough like each other to be considered a pair. 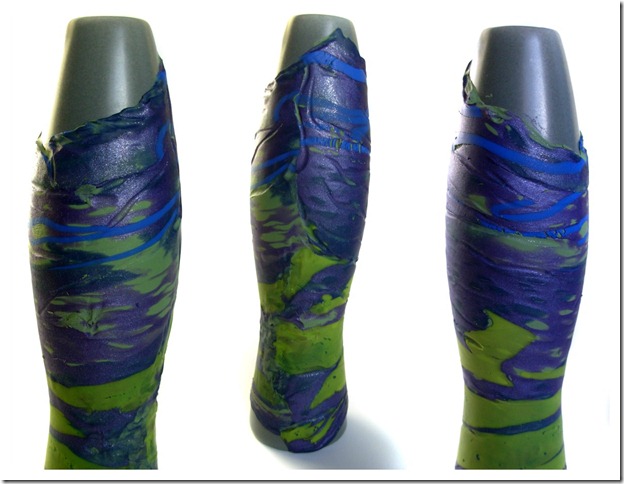 At some point the working volume of clay got a little out of hand.  This time of year there is essentially no horizontal space in the vicinity of my workspace so no where to put down a giant sheet of polymer.  So I grabbed a vase – I’ve done this before – and played with the surface.  Looks like a mountain range to me, rather than a salt lake. 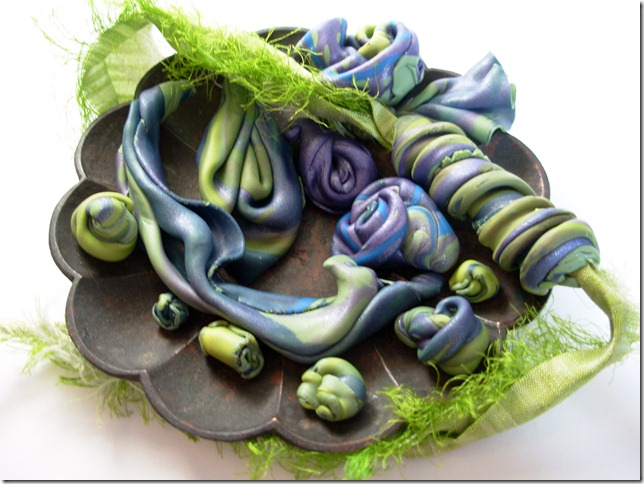 Pardon the blur, this is the pile of beads I was choosing from in creating the mermaid. 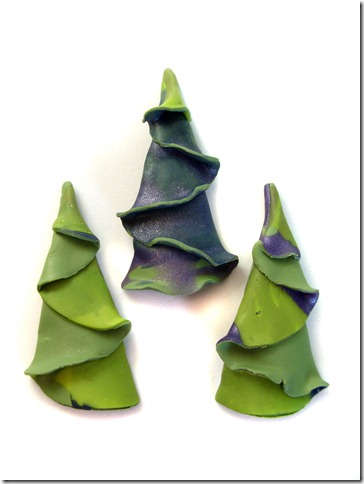 Lastly I had to try folding some polymer into Christmas trees.  I’m not sure I could convince myself to make them into earrings, I don’t really feel holiday jewelry much.  On the other hand I don’t think these are hit you over the head holiday.  Maybe they will be little ornaments or a way to pretty up a gift card.

I also didn’t show you the palette I didn’t choose for this challenge.  I would have been the easier of the two for me to work with so I decided to save it for another day. 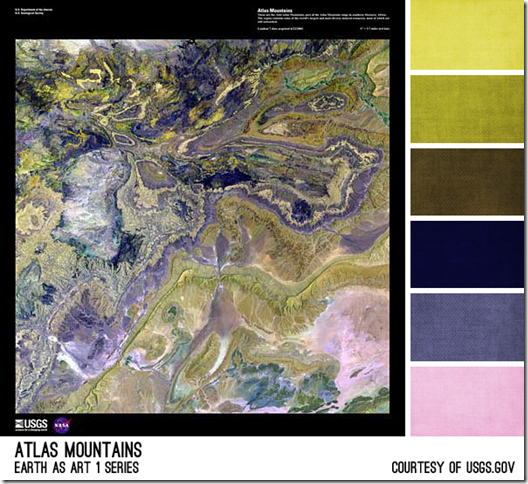 
Welcome new followers! It’s lovely to have you here along with all the friends already following.  I really appreciate everyone taking the time to comment and chat with me.  It’s awesome to be able to have feedback from around the world here at my own little slice of the internet.  Ok, enough, you want to hear who won the $25 gift certificate right? 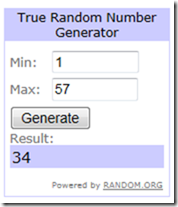 Luck number 34! (off to count – be right back) that entry belongs to

Thank you all again for playing along!  This was my first giveaway and it won't be the last.  Kathy, I’ll be in touch.
Posted by A Polymer Penchant at 13:59 2 comments: