When Erin Prais-Hintz posted this challenge I knew, before I even finished reading, exactly what book I should design around.  It’s a children’s book by the name of Sandman in the Lighthouse by Rudi Strahl, illustrated by Eberhard Binder and translated & adapted (from the German) by Anthea Bell.  I’m sorry I don’t  have a link to add for you to buy this lovely, as it is out of print.

Let me tell you a bit more about me to make give this selection some context.  I’m the youngest of four, with three older brothers.   Those of you at the end of the line, like me, can relate to the idea that nothing is the house is really yours, especially when it comes to the books.  There were many Richard Scarry books which were regular bedtime stories, but when one brother in particular would read me a story we always chose Sandman in the Lighthouse.  It certainly got to the point where it was just understood this would be the book.  Fast-forward twenty some odd years and I’m pregnant and weekly asking my parents to dig apart every bit of storage to find this book so I can read it to my own little one.  My mum insisting that she had already given it to me years before when they had moved.  I knew that wasn’t the case, but we’re both stubborn so the dance continued with me, every few months, saying “find it yet?” A night a couple of months ago I asked again and caught the smile on my brother’s face from across the room.  Yup, he had quietly taken the book himself long before I asked for it.  I really should have thought of that!  But at least with the location of the original known I was free to go ahead and find my own copy.  Sure enough, I found a copy of ebay in short order and it arrived on my doorstep the day before the Erin presented the challenge.

The story itself is good, but frankly, reading it now I think I was much more attached to the artwork.  Perhaps most attached to the experience itself of sharing the story with my brother.  Here’s the rundown: the Sandman crashes his boat heading to the lighthouse to put little John to sleep. A shark eats his sand and he is stranded in the lighthouse while all the world’s children stay awake and look for him.  A pilot with a sharp eye spotted a signal that he was stranded and all the ships raced to save him, but the sea was still too rough.  The sailors tried to rescue him with a breeches buoy over a cable but the breeches were too big.  The clever pilot had a tailor parachute in to make the Sandman a new pair of breeches. Success! Off he went in his breeches on a cable over the sea to a cargo boat.  Once ashore we got a new supply of sand from the wind and went around the world putting all the children to sleep.
I had many an idea of how to capture the story.  Ultimately I decided a clean and simple approach would be most in line with the book.  I created polymer beads, with ultralight polymer as a base, and surface detail with alcohol ink.  Let me show you! 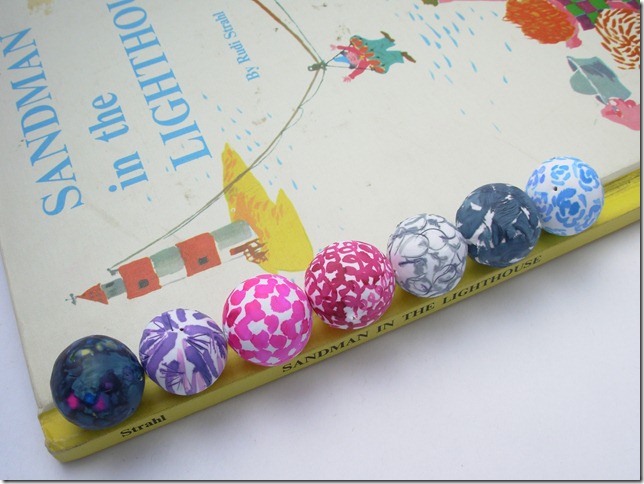 Now each of the beads represents a pattern from a part of the tale.  They are not in order above, nor in order in the necklace itself, which I’ll show you last. 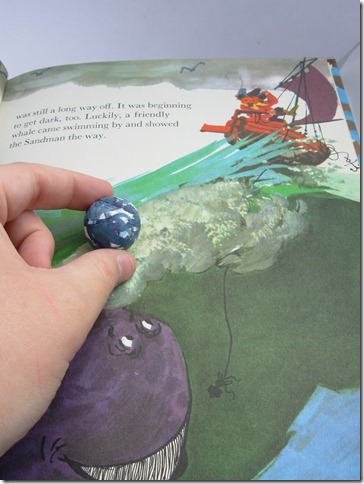 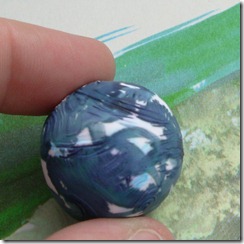 First up is the rough sea bead. 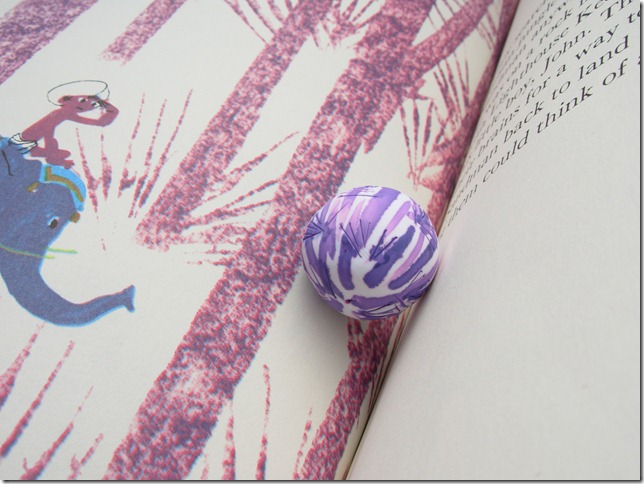 Searching the Indian jungle for the Sandman. 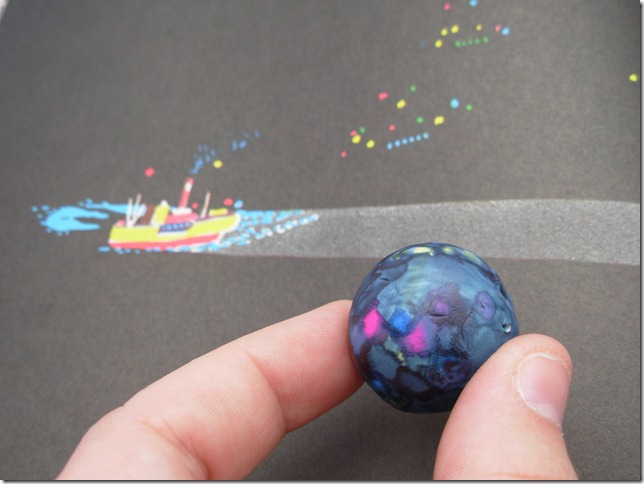 The ships getting as close ad they can in the rough, dark waters. 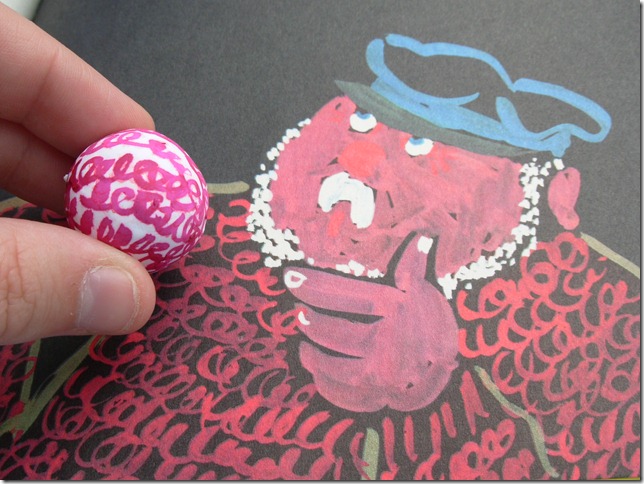 Jack Tar contemplating the Sandman falling through the original breeches. 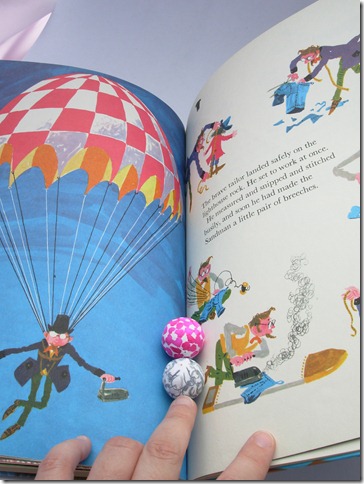 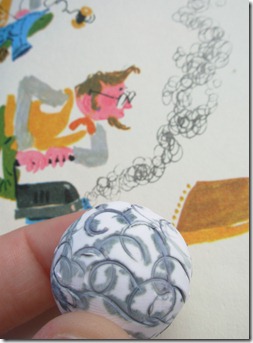 Tailor to the rescue! These beads are his parachute and iron steam. 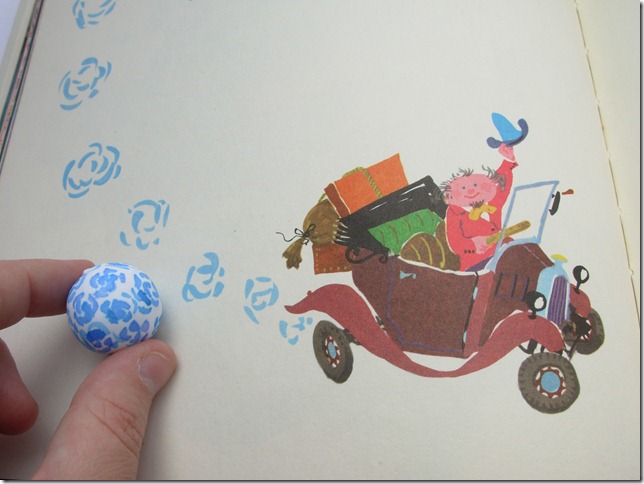 The last page, Sandman on his way.
It was a real challenge for me working in such a loose style with such clean colours but I’m very happy with the results! I kept the simple going by stringing this very long on cotton cord with a twist of silk.   I’m sorry for the last picture here, the daylight was long gone. I think this is will be finding the sun in many a summer outfit though. 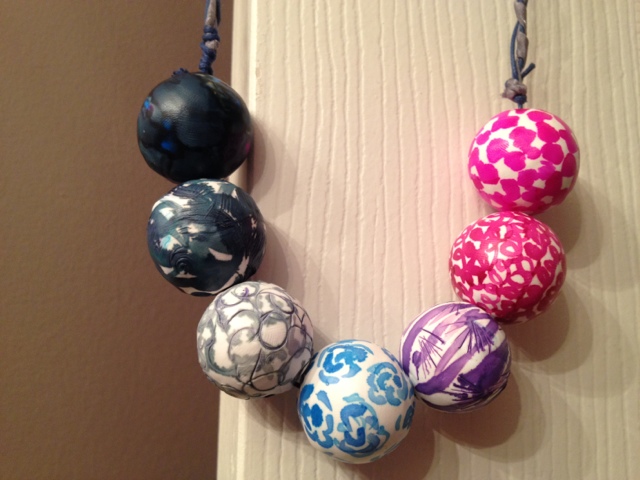 **oops It looks like I also don't know how to schedule a post! Sorry to those who may have missed it, and many thanks to those who came back

But I'll take the chance to add a daylight shot

Posted by A Polymer Penchant at 08:00

Email ThisBlogThis!Share to TwitterShare to FacebookShare to Pinterest
Labels: beads, challenge of literature, inspiration, polymer clay, sandman in the lighthouse