Well I've gone off on a tangent as usual! That's not such a bad thing really, but it always seems to happen more often when a deadline is approaching. I should have remembered that the blog hop deadline is ahead of the end of the month, of course! So I'm going to use this post as a bit of a place marker so I can join in on the blog hopping fun, but I'm gonna kiss that deadline. Here's a sneak peek and the direction I ended up going, straight from the studio window, still raw. 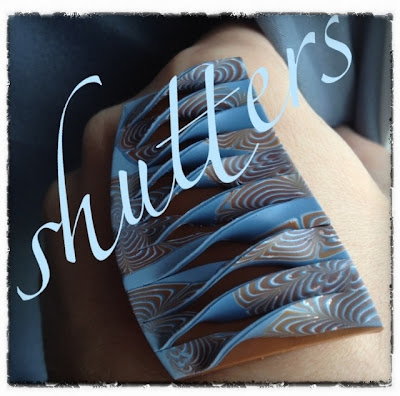 Update - May 30th
I have one finished piece to show you.  I had hoped to get more of my pile of beads made into actually jewelry, but I've run out of time.  So, let's go back to the beginning of the process.  Here is the inspiration presented from Art Bead Scene

I have to tell you, this painting didn't speak to me right away.  So I started by mixing up colours without any real plan.  Hey it's meant to be a challenge right?  Living in Canada, I generally have the added challenge of only using what I have on hand since ordering supplies with the inspiration in mind is not likely to happen in time. So a pile of colour at the ready I spent a little more time, thinking on the piece.  I will admit I did find a connection, a point to bounce of from.  I love that the one shutter up top is blue instead of green.  I started thinking about the view from that window. What was special about it? Why the little twist?  I started dreaming of images with strong horizontals breaking up the image. Indeed I became fixated on the shutter.

Now, I almost made it all mud, when in my haste to get at the pattern I stacked my mokume gane in a different order than I had planned.  I had this nice pearly burgundy that was just leaning a little plum.  I liked it.  I moved my cream tone away noting I better put another shade between these two so I don't end up going into the pinks... Sure enough, you guessed it, I got caught up stacked 'em just as I was trying to avoid.

Ah well, I decided long ago that any mistake in the studio is only a mistake if you let it stay that way.  So following Tim Gunn's infamous advice I made it work!

The polymer rectangles are my little version of windows full of a view broken up by shutter blades.  I made them in such a way that there is no back or front.  I brought in some wood, like you would find in a nice casement and then I created a t-shirt "chain" with the beads loosely knotted in.  There is no clasp as it stretches nicely over your head.

I still have a whole pile more to get creating with. Please excuse the lighting on the following iPhone pics, it was that or nothing at all. 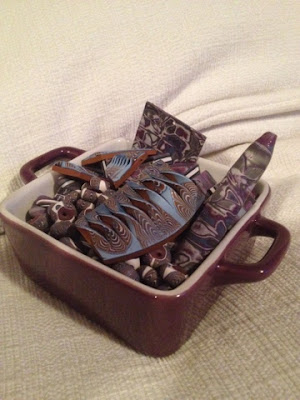 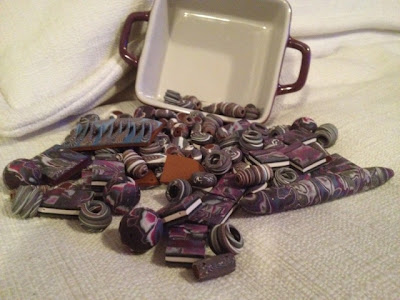 I'm looking forward to seeing all the other creations based on this same inspiration.
﻿
Posted by A Polymer Penchant at 17:53