Focus on life–week 13-have faith

This week Sally had us thinking and snapping on faith:

There are many of us who are religious and there are many of us who are not, but most of us religious or not have faith in someone or something. A faith that gets us through our day, a sickness or even a death. Faith is held by each of us, it is what keeps us believing that there will always be a positive outcome even if we can't see it at the time. 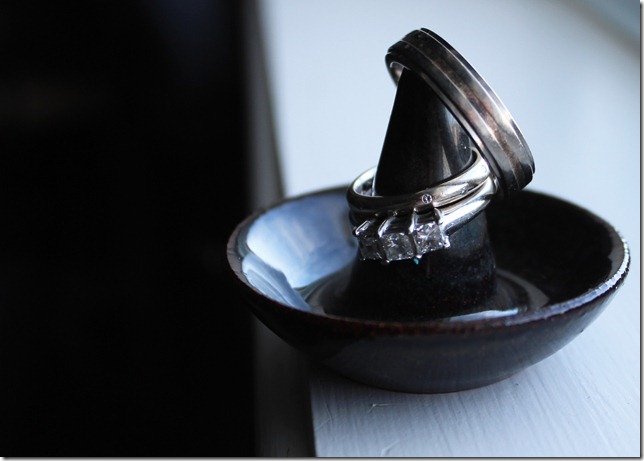 I picked up this little ring dish at the local pottery guild show one year.  I own a lot of pottery and confess I’m not sure who made this piece.  At some point it migrated to my work table.  After being frustrated by dents in polymer that I was rolling out I realized I had to stop being stubborn about keeping my rings on.  This little dish became a safe spot for them to sit in the mayhem while I worked.  Sometimes I have been known to forget to put them back on.  Hubby has come up with a whole variety of jokes to point that out to me when he has caught my finger naked.

Thinking on this I went and dug out that third ring you see on top.  That’s the engagement ring I bought him.  It’s Titanium and used to be a brushed finish.  The finish changed after my dad polished the heck out of it after it was discovered and brought back to me.

You see one day, maybe a month after we were engaged, we were headed out to meet up with friends for a ski vacation a few hours away.  I noticed he didn’t have his ring on.  There was searching and then we decided it must have flown off packing the car in the extremely cold day.  At some point I shared this story with a girl I worked with.  A girl who was in college and the walk from her house to school took her right past his house everyday.  One day when the snow was starting to melt a bit she remembered and looked around the driveway.  She called, in disbelieve I described it and went to pick it up with a big bunch of flowers as thanks.  It just so happened his birthday was the next day so with its fresh polish and one stubborn scratch into a new ring box it went.  It took me at least ten minutes to convince hubby and his parents it really was his.  They had all searched extensively.

Ring on, ring off, the faith remains.

Lets see what the faithful are up to at Sally’s
Posted by A Polymer Penchant at 22:26