Focus on life–week 10- all wrapped up!

This week Sally invited us to consider a myriad of definitions for wrap and “get to snappin’!” Her email arrived just after a text from one of my best friends that she was at the hospital to be induced.  This was just a couple of days before her due date, but there had been some twists and turns before getting there.  I also had plans to meet another friend’s new born son on the Monday, so photos of tightly snuggled baby burritos were an expected part of the week.

Nadda to share.  On my Monday visit, I did get a picture of the son and his big brother that was pretty darn cute.  But playing with two two year olds and an infant doesn’t exactly make for the right time to grab a “planned” photo.  Meanwhile my best friend welcomed her second son too and was home in a flash and I ended up visiting on the same day.  Again, two two year olds, a two day old and a 100lbs wannabe lap dog does not make for ripe conditions for the swaddling wrapped loveliness I had in mind.

I do have a reason for confusing you with all this!

I met my best friend when we were six.  She had just moved into a house the other side of the crescent, the summer before grade one.  I have a pretty vivid memory of hopping off my bike after dinner to ask her out to play only to be greeted by her mum explaining they were on the way to bed.  I recall being stunned.  Then seeing her and her older sister come to the door in pyjamas to say hello.  I’m realizing I may have had a lot of freedom for a six year old.  I just had to be home before the street lights came on.  I don’t know what the consequence would have been if I weren’t home in time, I just know it was something I never wanted to find out.  I did have two other girls roughly my age out with me, this wasn’t just my house rules.)  Of course the next day came and we have been friends ever since!

I know I’m very lucky.  Thinking on the prompt and pictures of wrapped up babes I realized that now I have held her first born on the day he was born and I held her second on his second day of life… and whoa, I didn’t hold my own daughter until her third day.  Which is just a little oddity of a factoid but I probably would have never put it in this context if I hadn’t been after that particular photo.  Which made me think, it’s probably my own experience with my child’s prematurity that had me chasing that image.

There is a picture coming I swear.

So thinking on my treasured friends and their gorgeous boys and how I hope our children grow as great friends too, I had a reminder – new friends are awesome too! 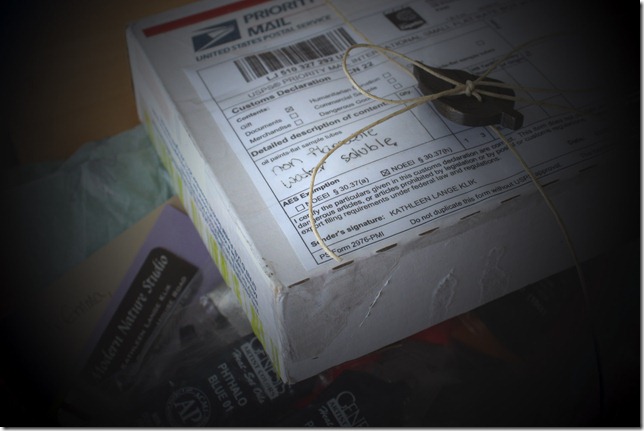 Kathleen of Modern Nature Studio has a generous soul.  When this focus on life series started and I confessed I had no idea how to take a photo with my new dSLR and she kindly offered that I could ask her any questions.  I haven’t taken her up on that yet but boy, I’ve put her to work!  She found a deal on great paint for polymer and offered to do a group buy, reduce those ever mounting shipping costs.  Well, shipping paint, we have learned is no swift stroke.  My portion of the order which she packaged beautifully, just because she can’t help herself, was wrapped – unwrapped- and rewrapped to convince the postal officials it would not blow up.  I love the addition of “non flammable, water soluble”.  I so appreciate her efforts in getting this little box of joy to my door.

Quite the introspective this week: old friends, new friends, favourite things tied up in string.
Not bad Ms Sally!  Now I’m very excited, as always, to see all the interpretations that this weeks worth of links, over on Sally’s blog, holds.
Posted by A Polymer Penchant at 22:52