4th Do Over Challenge reveal


I’ve had do-overs on the mind.  It’s been a couple of years since I’ve done local craft shows and I’m set to do two, hopefully three, this fall.  I’ve been pulling things out and deciding if I still like it -- if it’s still in keeping with what I want to present.  It seems I’m not alone in this process.

Jeannie Dukic, jeweler and mixed media artist extraordinaire, hosts a Do Over Challenge.  She’s even got the details for the 5th instalment up on her blog already.  In her words:


“I will send you an old, tried, boring piece of my jewelry for free and you will work your magic and turn it into something beautiful and amazing.”

I put that in quotes, since I would certainly not use those same words to describe what I received in the mail.  Look! 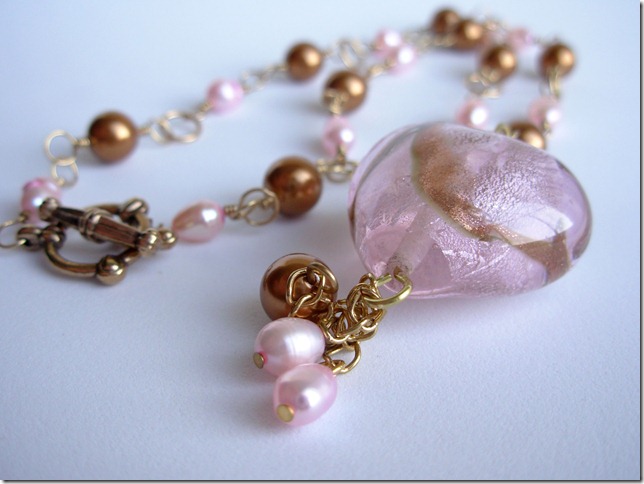 I kept it complete for some time considering it.  Swarovski pearls and fresh water pearls all neatly wire wrapped, a simple toggle and a hefty glass focal.  It moved around to various spots on my worktable.  I removed the focal and decided I would make some clones of it from polymer, maybe create something with three hearts.  Well, that was the plan until all hell broke loose. 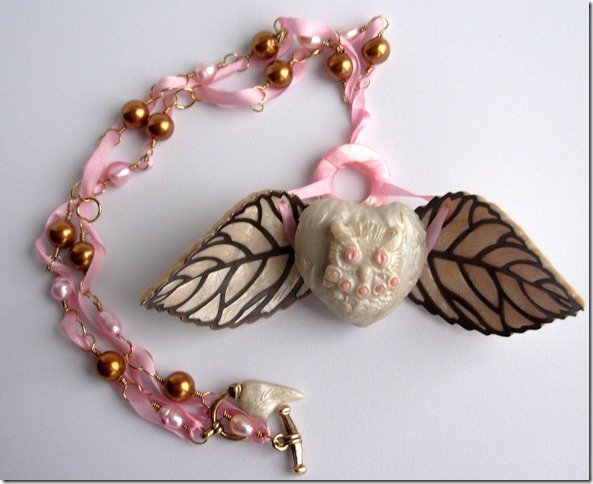 You see I had the leaf filigree sitting out since I was making up some more fall leaves (intended as wings here).  I also had a newly created owl mould out thinking it might be a good fit for the Hooters challenge that had just been announced on Artisan Whimsy.  Then ideas of October and breast cancer awareness and pink ribbons all crept their way in. 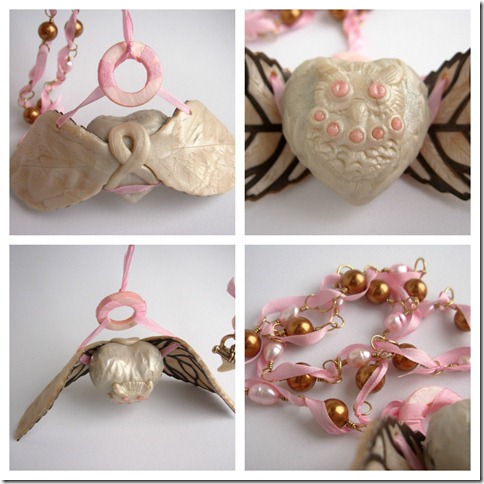 The leaf filigree came about as a wing by twisting the filigree slightly then adding the mica shift polymer which I textured to appear as feathers.  Installing the wings on the heart essentially made the holes I had planned on the heart itself inaccessible.  I drilled holes in the wings and looped ribbon beneath the heart, through the wings and then looped through a shell ring (which I now think sorta looks like a halo too).  The wings are attached with liquid polymer and then reinforced with the polymer “ribbon” overlay.  It feels strong to me, but I can’t help think that people would be tempted to flex those wings weakening the bond…. (may need another do over!)

There’s a lot going on in one focal element so I kept the wire wrapping intact and just wove the rest of the the silk ribbon through it and knotted it.  I gave the toggle ring a little polymer feather suggestion also.  Now there was a pair of earrings too and I hadn’t given them much attention until I went to take pictures.  I looked over at these other beads I was trying out and decided yes, they wanted to part of an earring makeover! Then in my haste to make it happen and still have enough time to take said pictures I broke one of the ear wires. Just snapped it, since I wasn’t holding my pliers right since I was still holding a wad of ribbon in my hand.  I know I have nothing this metal colour in my stash, so what’s a girl to do?  Well I found another pair of earrings in need of a makeover too. 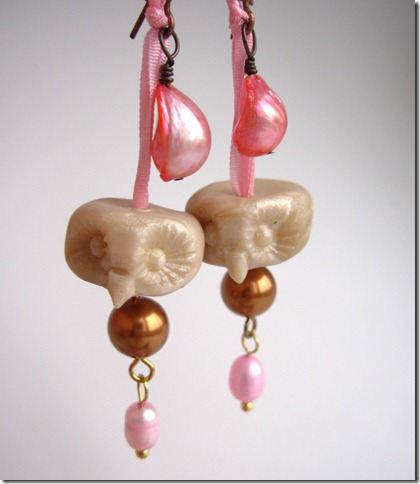 These are crazy long to go along with my crazy huge necklace.  But they're pretty fun. 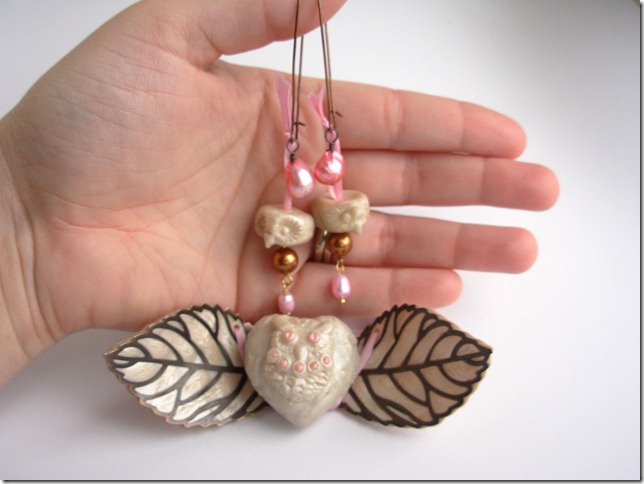 This really was a fun challenge trying to create something new while holding on to the integrity of the original.  I remember one time, somewhere along the way, Jeannie commenting that she would love to have a playdate. I feel like today’s the day!

Better yet, there’s a whole bunch of us playing along and collaborating with Jeannie.  Thank you so much Jeannie for allowing me to join in this special event.

Posted by A Polymer Penchant at 00:14