Show season that is.  I’ve got two shows down and two more to go for the season.  I doubt at this point another will pop up, but I am available in December.  I’m also planning a sale (more on that at the end of this post) so I’d like to fill up the A Polymer Penchant etsy shop.  Naturally, during this busy time I am trying all sorts of new things.  It’s madness, but in a good way.

The Navan show, this weekend past, is such a nice, small and friendly show.  Most of the vendors are seasoned, but each year there seems to be one or two new ones.  I can’t recall if I did it only two years or three before taking a break, having Averleigh.  This was the second year back and it’s nice to have returning customers and admirers.  It’s always interesting to see what people reach for.  I have a necklace with velvet beads and pretty much every person touches the beads, but I can’t seem to entice anyone to try it one.  Other items that I’m excited about seem to spend the whole day unnoticed.  I had four pieces, brand new, never photographed, sell.  This is great, too bad I can’t show you!

I also had a wonderful mix of “older” pieces ie not made in the last month, sell.  Like this one 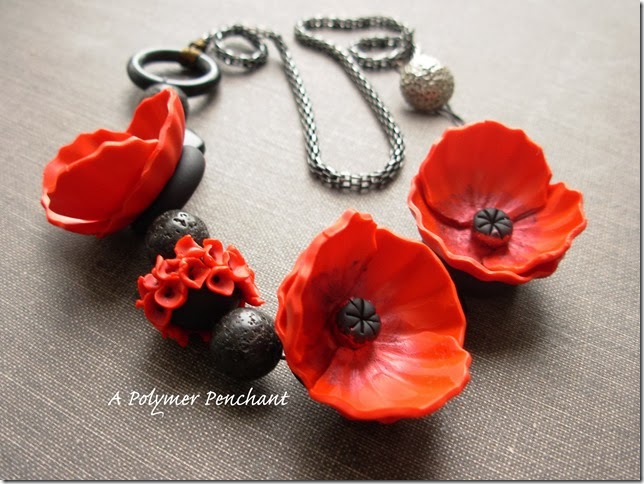 This picture was also used in the advertisement for my show in two weeks – Baz’ART.  I think I will have to make another incarnation or two, maybe with just a single bloom and some wire work.

I’ve been working on my wire working skills for some time now and I was excited to get moving and finally try some things I’ve had for a year, some longer.  Yes, it was high time to try Liver of Sulfur, my butane torch, and my tumbler.

Here is the pile of copper clasps and what not I worked up, all ready in the garage with my LOS, my handy (stolen) Spiderman container, some fresh water and baking soda. 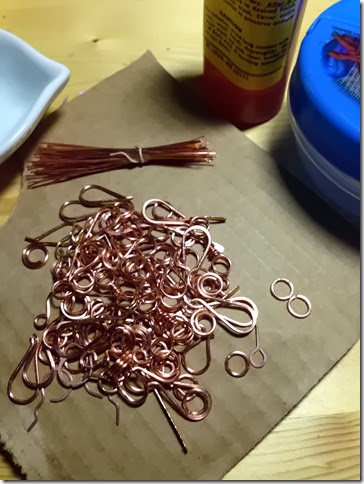 I used a kettle to warm (not boil!) my water and a couple of drops went in and then I started adding the copper. 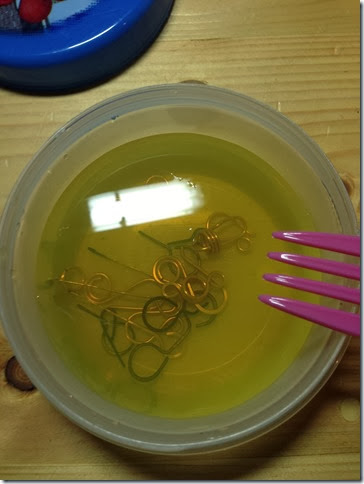 Hmm that’s funny, the 20g pieces were turning black right away but the 16g weren’t.  I wouln’t think the gauge would make a difference, only that there is more surface area. Oh, wait a sec, they are where I had hammered… The proverbial penny was dropping.  That damn wire wasn’t bare copper at all, it must have been coated!! 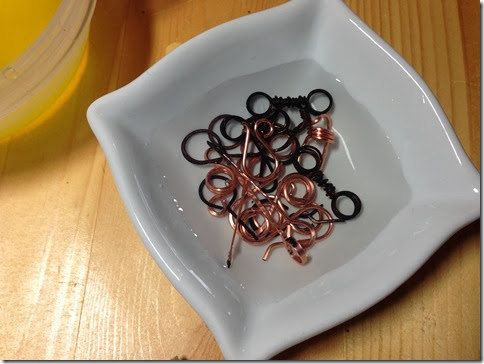 I rinsed and dried and, a bit deflated, decided that I would not bother to clean the few that did oxidize at that moment.  They are just waiting for me still.  I had a good giggle at myself since I do have a fresh pound of 16g ready to go, I just thought I would “use up” the small coil I had.  Sure enough in small letters it says”non-tarnish”.  I moved on and filled that butane torch at long last.  I had mixed success balling some copper.  I moved on again, looking for something to work out and loaded up the tumbler with all my special non-tarnish clasps and success! I’m very happy with how they turned out in the end.

Now a creative person should never complain about all the ideas, all the things that just want doing right now.  BUT at some point a creative person, who endeavours to sell their creations, should apply some of that same creativity to marketing.  Working on that.  The lovely ladies at Love my art jewelry know a thing or two about just that. 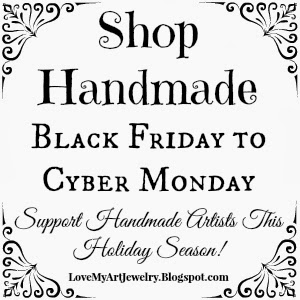 The wheels are turning on just what I will offer, but I went ahead and joined in for the event.  Now, it’s time to plan and organize.  (I think I can, I think I can…)
Posted by A Polymer Penchant at 23:21