Back to the start


While my partner and I are waiting for our bead soups to arrive I thought I would take a moment to tell you how I got here.  I’ve never been very good at writing up those little bios, or artist statements and the like.  The mere thought of doing so makes me get a bit twitchy.  Time to start connecting the dots a bit though.

I come from a creative family.  My Dad with the language and carpentry skills, my brothers all play guitar amongst other things and my mum went to art school and can create with anything.  Cooking, gardening, pottery, copper enamelling, a myriad of different embroidery and the list goes on, she can do it all.  This was the soil I was planted in.  I was always creating in some fashion or another.  My most recent venture into the polymer world started in 2007 and my most recent foray into jewelry followed as a natural progression.

A couple weeks ago when the buzz around bead soup participants was the why and when around when you started making jewelry.  That got me trying to think of an actual starting point, and boy did I struggle narrowing it down.  It’s not quite carbon dating but from a collection of vague bits of information I think I can place my first polymer pieces as being made around about age 8-10 or so. 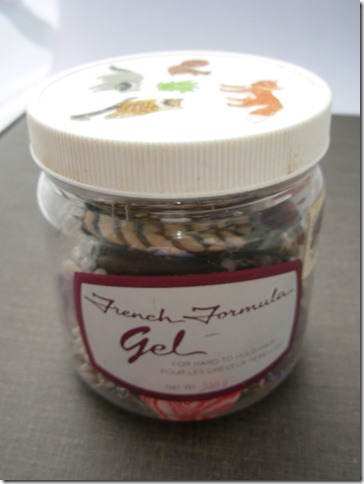 First bit of evidence: my collection is stored in a recycled gel container from the era in the 80s when my brother wore his hair spiked high and the empties were plentiful.  Fuzzy sticker embellishment on top of course. 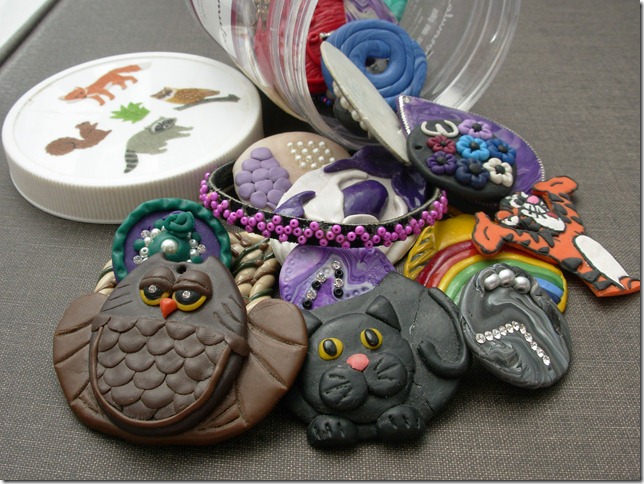 A variety of creations.  The owl and cat I know were direct copies from some fimo book I remember getting (so I was old enough to read). The tigger was later on and remember it was another book that came with a selection of sculpey across the bottom.  Gluing seed beads onto suede lace, yeah that one’s not memorable. 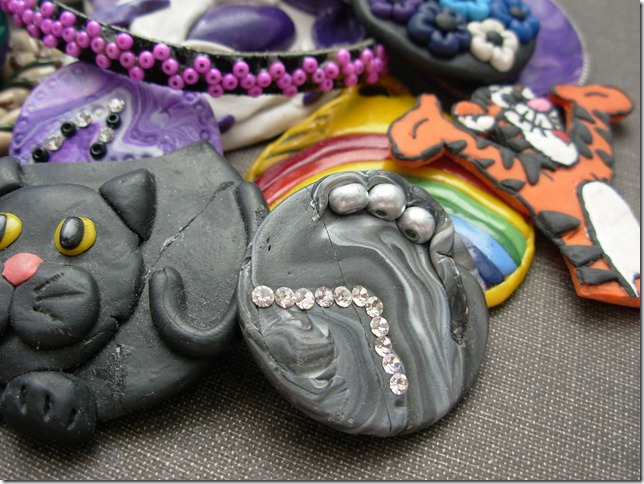 See how the cat, that grey one and the tigger are all broken?  Funny story. I know I was too young to know that people who cook talk about oven temperatures in Fahrenheit.  Being a Canadian girl all I knew was Celsius so naturally when I handed over my creations for my mum to bake up I told her the temperature in Celsius. I was probably very insistent that I was right when she would question that it sounded pretty low.  I always wondered why I would break things, I was always so careful with my things.  One day we put it all together that people who cook talk in Fahrenheit so nothing I had made in those days had ever been cured properly, or even close to it.  All things considered, I don’t think that grey one is half bad. [and PS I know how to operate my oven now!]

I thought I had a photo but turns out not.  The last dating clue I had in this little remnant of the past was a mostly seed bead bracelet studded with a few silver rose beads.  I distinctly remember creating it after visiting the very first Sassy bead shortly after it opened in the “early nineties”.  My brother had taken me and we’d spent quite awhile picking out beads and as we went to the cash I had that sinking feeling that the money in my pocket was not going to cover what was on this little silver tray.  My brother, I’m sure (now), fully aware of my struggle refused to let me put anything back.  I remember the bill was 31 something dollars, I couldn’t say how much of that I contributed, but I know my brother the university student didn’t really have the funds for bead shopping, but I left that store one happy girl.  I guess the rest is history!
Posted by A Polymer Penchant at 23:13