focus on life–week 2–a silhouette

Continuing with this months theme of minimalism, this week’s prompt from Sally:


“A silhouette: a photograph with a subject(s) captured in a shadowy outline with little or no detail against a bright background.”

I love looking around for the cats when I get home times, and realizing that they are actually hidden in the window behind the curtain, a favourite silhouette.  I knew I wanted to get such a photo.

I grabbed the camera when the light was right and convinced first kitty to come over.  He was not very interested in being the model, more wanting to go back to sleep.  Next day he puked on the laptop – I did not take a photo.  I understand this was payback.  Later I was trying to cut #2’s claws and the damn thing shot up and hit me in the eye.  That little piece of claw splintered in my eye and as I blinked little slivers were scratching me.  I ran for the tap and still had to turn it inside out to get them.  I decided this was a pre-emptive strike.  That leaves the kitten aka “Roman Blind Killa” so I didn't really want to invite him to a windowsill.

20 minutes ago this happened 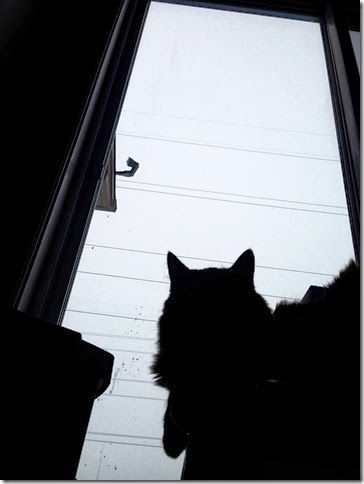 Score one for the supposedly short hair kitten.
Posted by A Polymer Penchant at 14:41

Email ThisBlogThis!Share to TwitterShare to FacebookShare to Pinterest
Labels: cats are jerks, focus on life 2014, Silhouettes