I thought I had this one in the bag right off the bat.  When Sally Russick’s prompt arrived last Saturday I had to smile at the picture she used since it was so close, in theme, to ones I had been taking just hours before.  What serendipidy!  Immediately I had a plan.  You see the prompt was to go and create some art – any art.   That morning I had tried to capture some pictures of Averleigh painting, which is a new medium for her.  I like this one where she is swapping the brush from her left to right hand.  I don’t think she has decided yet (see paint on both sides) but there seems to be a left preference. 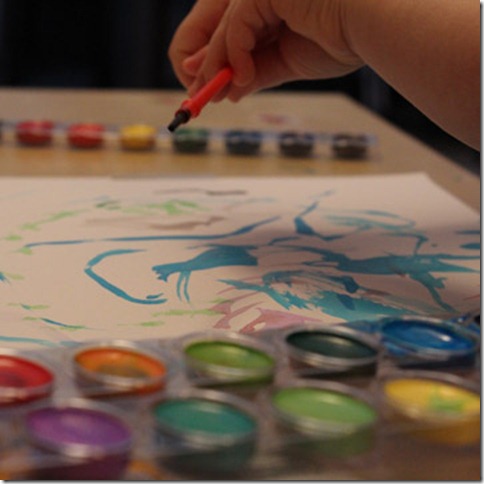 I thought, great  I’ll grab the white crayon that I usually hide since it “doesn’t work” and frustrates the hell out of her.  I’ll show her how you can use it as a resist.  I tried the next three days running to sit with her and paint and she was not interested in sharing her space with me in this way.  No way, no how. 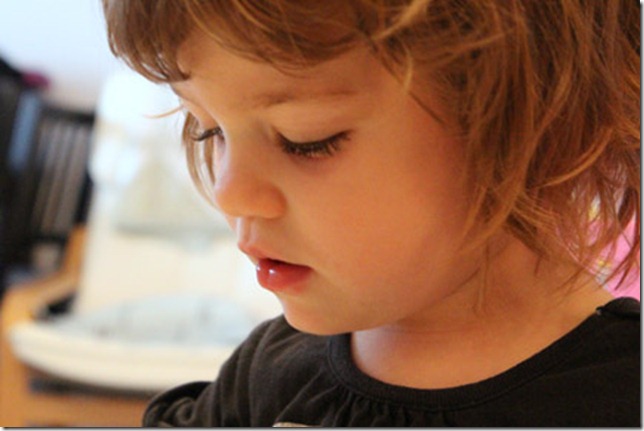 I can respect that.  I let the artist have her space.  So far every painting has started in the same shade of blue, girl after my own heart she is.  I could have created my own watercolour but I didn’t want to use her paints without her as surely she would know.

Thankfully, mid week I was inspired to try some polymer headpin making again.  Not what I had in mind to share for this project today, but I did get in the groove and move to making these not-sure-what-to-call-them-yet beads.  Do you feel that shift creating?  That switch in the tracks, moving from left-brained planning to just right-brained making, do you know the one I mean?  I can’t always feel it switch over but sometimes I’ll look up and realize I’m far from where I began and I’m not sure quite how I got there.  [side effect – I never write down a colour recipe or steps of a made-up technique]

Join me in heading over to Sally’s blog to see the art that everyone has been creating.
Posted by A Polymer Penchant at 21:52