Are you beating the heat?

I hate the cold, and I share that fact with anyone and everyone in the winter.  Like, a lot.  So I really try to never complain about the heat, seems only fair.  I’m sitting in central air while I write this so it’s not all that hard.  I really feel for those who can’t get any escape from the heat when it’s oh so hot day after day.  So the other evening, after being air conditioned all day I had to head outside for some heat.  Averleigh had to come too, of course, as that girl would love to live outside.  Our neighbour had the sprinkler out and fully dressed in mere seconds she was running through it.  She was being so cute I reached for my cell phone to snap some pics quick and put it away before it got soaked too (since I just had to join in, once).  I completely forgot I had taken the pictures.  I went looking for another picture today and found this 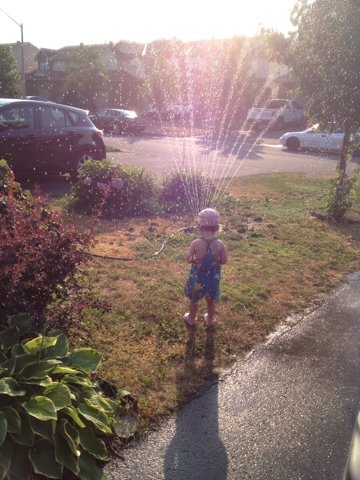 I’ll spare you the whole string I fired off.  It’s nothing fancy, or technically strong. It made me stop dead in my tracks though. That's my girl with a long shadow and it’s the first time I’ve ever caught her in that context.  It brought me right back to the day she was born and how thankful I was that my husband and I had opted for iPhones, for both of us, the Christmas before.  As she came by surprise, and I saw her only for a split second.  If my husband hadn’t of had a cell phone with a camera on him that day (he arrived at the hospital in softball gear, from the field) he wouldn’t have been able to take and text me that photo.  I wouldn’t have had it to literally cling to for the 12+ hours it was before I got to see her,  – when I was supposed to  be “sleeping”….

Today I’m thankful for cell phone cameras, sunshine and little girl shrieks of joy.  That beats any heat.
Posted by A Polymer Penchant at 23:18