Wouldn’t it be nice if it were only 7? 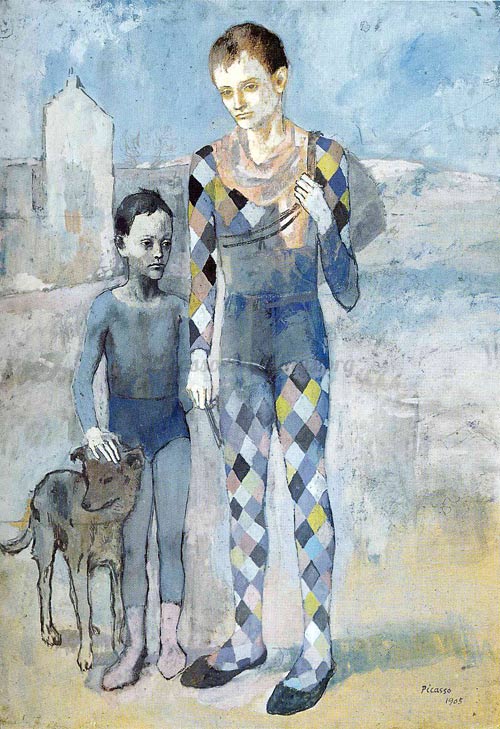 This month I was so excited for the ABS challenge, featuring Pablo Picasso’s “Two Acrobats with a dog”.   After reading through the post, seeing all the blue, the tie in to the 7000 bracelets campaign – I was hooked.  Work with shades of blue, possible science references it’s so up my alley it’s out the other side!  So naturally I was stumped.  I made my typical false starts and while I liked the result it wasn’t really telling the story.
I think I’ll just show you where I ended up and work backwards to fill you in on the thought process 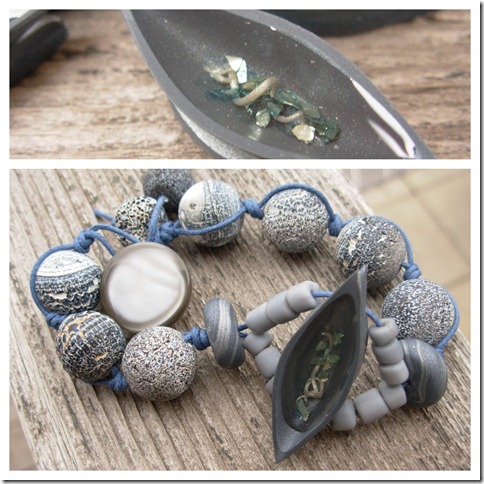 I backed way off the Picasso reference and worked basically with just the harlequin shape.  I had decided from the start that I would be making a bracelet for the cause, even though I can assure you I haven’t made a bracelet in probably ten years or more.  Probably the main reason for that is I wear two bangles.  I put them on at about age 15 and they basically are a part of me.  Not inclined to wear bracelets on my writing hand, I just never fuss with them.  This is not the part where I tell you I am reformed and have a new found love of making bracelets.

About the focal.  I warned you, I did a degree in Science so I had a lot of different imagery to draw from with this idea of rare genes.  I decided that I would use the harlequin shape like a window into the DNA. That white thread of polymer inside is a loose coil, an open, unwinding DNA helix. Without losing you all completely with the process of how and when a mutation occurs in a gene, let me just summarize by saying the topaz glass glitter fragments thrown about are there to represent mutations.  The resin holds it all together, much like the families of those affected.

This bracelet combines this polymer focal with a couple of accent beads, large rough shaped seed beads, antique agate and cotton cord.  I ended up with a simple button as the clasp, I didn’t like any of the other clasps I had on hand with it.  But this lightweight button meant I needed some heft added to keep my equally lightweight focal on top of the wrist.  So I ended up with two rondelle agate dangles at the clasp and I’m pleased with the mechanics.

This was my first time adding resin to polymer and I was so happy to find a piece to try that out with.  Since I expected that the batch of resin would go a lot further than just one polymer bezel I created 7 along this theme. 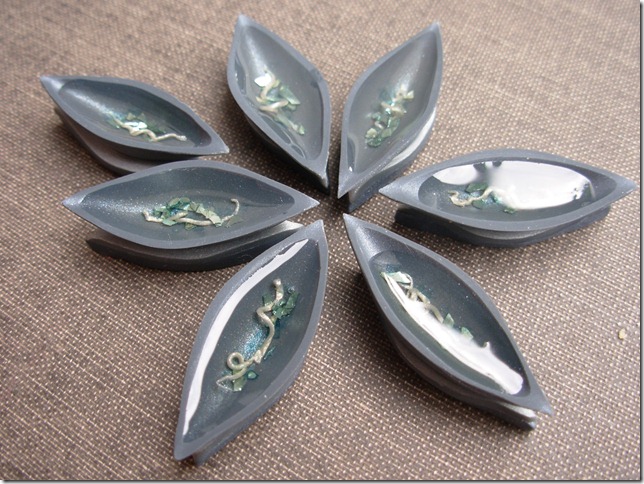 I have zero experience in photographing shiny surfaces and had the help of a two year old at the time, so the above is the best I got, you get the idea I hope.  I’ve left them undrilled for the moment so I can have maximum design possibilities.  I’ve decided I will complete all 7 bracelets with a variety of designs before 2013 is here.  That may sound a ways off, but I want to take my time and give the best I can rather than rush to the finish line.  I will share each one here as it’s created and then send all 7 at the end of the year.  I’m not sure if there will be a confidentiality issue, but I would love to find out the specifics of a certain condition or two of those who have been on the list to receive a bracelet the longest.  I’d love to give something that speaks directly to the condition.  I think that would give the wearer a strong basis for discussing it and raising awareness.

There will be 7 bracelets from me, now if only there were just 7 rare diseases.

Thank you Art Bead Scene team for being such an inspiration in so many ways. 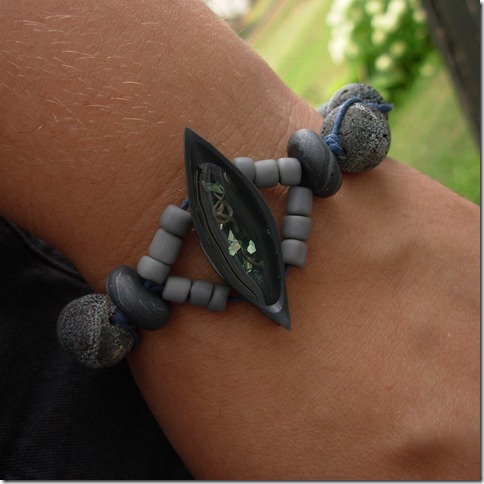 Posted by A Polymer Penchant at 22:47